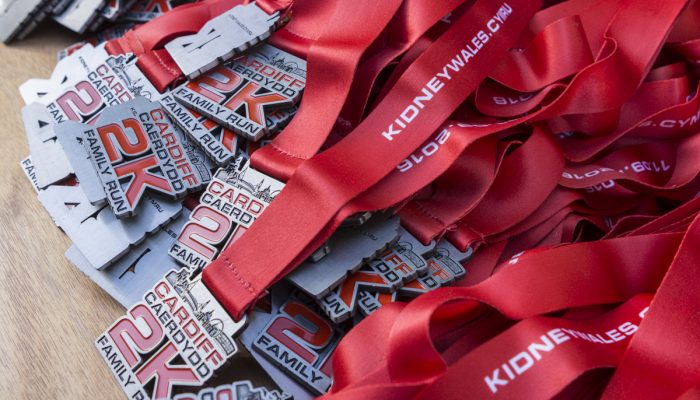 Runners at the ready…it’s the 30th anniversary of the Cardiff 10K!

Kidney Wales is reaching out to runners across Wales to take part in the 30th anniversary year of the Cardiff 10k, the iconic road race which is being held in Cardiff city centre on Sunday 6th September.

The fast paced race, which this year celebrates its thirtieth anniversary, is expected to be the biggest event yet, with an exciting range of celebrity faces supporting the event.

Organised by leading Welsh charity, Kidney Wales, the Cardiff 10k is one of the top ten road races in the UK, attracting thousands of runners who take on the scenic city centre course.

This year’s race will take place on Sunday September 6th, with the main 10k event commencing at 10.00am and the 2K family run starting at 9.15am. Kidney Wales are calling for Kidney Wales fundraisers to run on behalf of the charity on the race day.

On Friday 19th June, Kidney Wales were joined by local businesses, loyal supporters, friends and family at Pettigrew Tea Rooms in the castle grounds to launch the official sign up period for this year’s event. A number of Welsh celebrities including sports presenter Sarra Elgan were also in attendance to support the launch.

Speaking at the event, Sarra said: “I have been a patron of Kidney Wales for many years and have met families who have loved ones who suffer with chronic renal failure. I have witnessed firsthand the hardships they experience and the struggle they endure whilst they wait for a transplant to become available.

“I am proud to support today’s launch of the 2015 Cardiff 10k event – an extra special year as the race celebrates its thirtieth anniversary – an incredible achievement! The event has become a key date in the Welsh sporting calendar and it is really inspiring to see the amount of people involved, especially little ones running with mums, dads and in some cases even grandparents.

“Not only is the Cardiff 10k one of the longest established road races in the UK but it is held in high regard in the racing calendar, thanks to its fast paced course that attracts a combination of top athletes and have-a-go-heroes who raise much needed funds for Welsh charities, including Kidney Wales. ”

Roy Thomas, Chief Executive of Kidney Wales, who organize the event, said: “We are thrilled to see so many faces here to support the launch of what is an incredibly special anniversary year for the Cardiff 10k. This year we turn thirty and we couldn’t be more proud of what we have achieved over the past three decades.

“With this in mind we want as many new runners as possible to enter this year! No matter whether you would consider yourself a runner or not, please sign up, it really is the taking part that counts. As well as raising as much money as possible for good causes across Wales of course.”

Over the past 30 years the Cardiff 10k has raised a staggering £1.5 million for Welsh charities, including St. Johns Ambulance, Cancer Research Wales and LATCH. This year, Welsh cancer charity Tenovus has signed up a 60 strong team to run in the event, purchasing Cardiff 10k’s charity package, which offers special rates for charity team entrants

Following a change to the Cardiff 10k race route in 2014 due to restrictions enforced by the NATO conference in the city centre, this year’s 30th anniversary event will see a return to the original race route, which will see runners running through the streets of the city centre and Bute Park.

Registration for the race is now open and people of all ages are encouraged to get involved with the 30th anniversary race, which gives runners options to enter as an individual, or with friends, family or colleagues in the Community and Corporate Team Challenges.

The Corporate Team Challenge is open to all groups of abilities consisting of four to six runners. Previous years have seen some of Cardiff’s largest and most successful companies registering teams including; Legal & General, Admiral, Spectrum Internet and Box UK. The Cardiff 10k sees as many as 200 teams enter each year, including small teams of office workers and groups of friends.

Back to regain their title as the fastest team competing in the Corporate Challenge are South Wales Fire and Rescue Service who were knocked from their 5 year reign at the top of the leader board by the Royal Navy last year.

Teams must consist of four to six runners, with the first four over the line in position making up your team score. Before the race starts you will have the chance to have a team photograph taken by a professional photographer. This photograph will be framed and given to you as a memento of the day for your office and workplace.

What’s the next step?

Sign up online at www.cardiff10k.com, or to register over the telephone or to learn more about the team challenge events call 02920 343 940.

You can set up an online fundraising page at www.cardiff10kfundraising.com to support the Kidney Wales Foundation, which will make a difference to families across Wales affected by kidney disease and renal failure. Kidney Wales are asking for a £40 fundraising target from each of their supporters which can pay for an individual portable DVD player to make the many hours a week a patient spends on dialysis less distressing.

Runners supporting Kidney Wales will receive a Kidney Wales running vest or breathable t-shirt to ensure runners can be easily spotted by supporters along the course, a professional photograph which will be taken before the race, and the chance to have paid entry fees refunded if fundraising exceeds £150.

Breccon Carreg, this year’s official water sponsor will be on-hand across the race water stations to provide runners with bottled water and plenty of cheering.