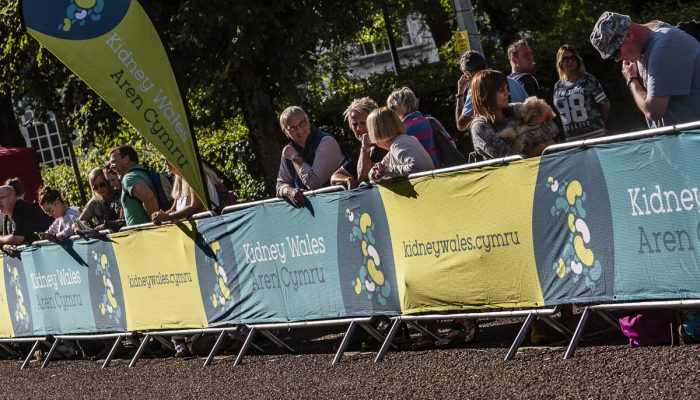 An NHS worker from Rhondda who was diagnosed with kidney failure at the age of seven is running the Cardiff 10k this September in support of race organisers, the Kidney Wales Foundation.

Rob Richards, from Gelli has relied on one-fully functioning kidney since the age of 7, and now at the age of 43, and experiencing fluctuations in his kidney’s health, Rob has decided to race for the charity that has a direct link with his medical past.

In 1977, when Rob was 7 years old, he awoke with severe pain in his abdomen. He was rushed to East Glamorgan Hospital where he and his family discovered that one of his kidneys was failing, having never functioned correctly from birth.

Almost immediately, Rob was transferred to what is now the University Hospital of Wales, and the failing organ was removed. Rob remained in hospital for just over two months to recover from what was a much bigger procedure back then.

For more than 35 years Rob encountered no complications from relying on one functioning kidney until 2014, when he was hospitalised. Since then Rob has been hospitalised a number of times, and his kidney functionality has been uncertain. Now in his forties, and experiencing unexplained bouts of illness, Rob is determined to ensure his remaining kidney does not deteriorate.

Rob is not the only one in his family experiencing first-hand the effects of living with kidney problems; Rob’s mother has also been diagnosed with stage 3 kidney failure, due to long-term damage caused by diabetes.

Determined to remain healthy, and to show his support for the work of Kidney Wales, Rob is running for the charity in this year’s 30th anniversary Cardiff 10k event.

Rob is confident that he’ll complete the city centre course in 45 minutes and is maintaining an active training schedule, which he hopes will see him to the London Marathon in 2016.

Rob said: “Ever since I started falling ill again last year, it really made me think about my health, and how I could commit to live a healthier lifestyle. I quit smoking and signed up to the Cardiff 10k, an event organised by a charity which is very close to my heart. It seemed silly not to sign up!

“Kidney Wales are an incredible charity who do amazing things for people going through the same difficulties I did years ago and I am extremely happy that I am able to compete in this successful event and give back to something to a charity that has direct links with my medical history.”

Roy Thomas, Chief Executive of Kidney Wales, said: “We are extremely grateful for people like Rob, who have experienced kidney problems in the past, and who demonstrate to other patients that leading an active life after kidney complications is completely attainable.

“Here at Kidney Wales, we want to thank everyone supporting us at this year’s Cardiff 10k, and want to encourage people of all abilities to sign up and run. It’s a great day out and I wish everyone running the best of luck.”

This year’s 30th anniversary year of the Cardiff 10k will take place on Sunday 6th September and is expected to be the biggest event yet.

The race, which is one of the top ten road races in the UK, attracts thousands of runners who all take on the scenic city centre course.

Registration for the 2015 Cardiff 10k event is now open and people of all ages and abilities are being urged to get involved with the iconic run.