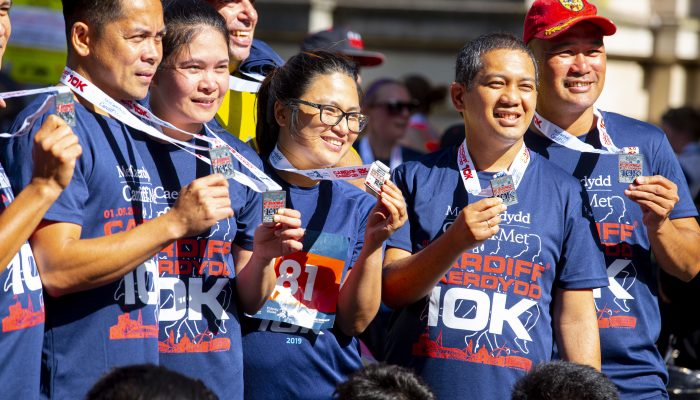 A record number of professional athletes, runners and fundraisers took to the streets of Cardiff on Sunday morning (September 1st) to take part in this year’s Cardiff Met Cardiff 10K and 2K, in a celebration of fitness, fun and fundraising.

Organisedby leading Welsh charity, Kidney Wales, this year’s Cardiff Met Cardiff 10K attracted 9,000 entrants, and once again cemented the race’s position as one of the top ten road races in the UK.

Beginning at Cardiff’s iconic Museum Avenue in the heart of the city centre, runners covered a flat and fast paced course, passing the Principality Stadium before heading up Cathedral Road, cutting across Llandaff Fields and then heading through the historic grounds of Bute Park and Cardiff Castle, before finishing back on Museum Avenue.

The first to cross the finish line was Jake Smith who ran the city centre course in a time of 29 minutes and 33 seconds. The first female to cross the line was Charlotte Arter in a time of 32 minutes 45 seconds, both winners are from Cardiff Metropolitan University.

This year also welcomed one of the highest number of corporate team entries the event has ever seen, with more than 64 teams signed up in the Corporate categories.This year’s team champions were South Wales Police who completed the 10K course in a very impressive time.

Despite its strong race pedigree, the Cardiff 10K race is a crucial fundraising event for organisers Kidney Wales, who established the event back in 1986.

In the last three years, the race has helped to raise more than £200,000 for the charity, who has used the funds raised to support thousands of people living with kidney disease across Wales, and their families, as well as to support many other charitable causes; like the refurbishment of the children’s dialysis unit at the University Hospital of Wales (UHW).

Headlined by Cardiff Metropolitan University, this year’s race had a unique treat for race entrants. The University offered students and staff, from its podiatry and sports massage programmes, to support runners with specialist advice and a massage area for runners was also set-up at the race village to provide some extra recovery support.

Speaking about the race, Pro Vice Chancellor Leigh Robinson from Cardiff Metropolitan University commented: “We were delighted to be the title sponsor of the 2019 Cardiff 10K and 2K fun run. Aligning with our health and wellbeing strategy, the Cardiff 10K is a perfect fit for our community and our values. Our staff and students had a fantastic time running and helping runners at the race village and we hope everyone that took part is now enjoying a well-deserved rest after a great day.”

There was a jovial atmosphere all morning in the Capital as the sun shined, with big crowds and plenty of fancy dress outfits on show, from a daffodil costume, to a clown and even a caveman.

There were also some inspiring entrants involved in the race.

Nicola Parsons, from Bridgend, entered the race with more than 100 friends and family, known as “Alfie’s Misfits”, to run in memory of her husband who passed away in 2018.

A 20-strong team from the transplant unit at Wales’ largest hospital, the University Hospital of Wales (UHW) also got involved, which has a special poignancy with organ donation week beginning on September 2nd. The team – comprised of doctors, nurses, surgeons and admin staff – supports patients every day at the hospital, by performing lifesaving kidney transplants, and their participation will hopefully inspire more people to sign up to the organ donation register.

A special landmark was also achieved by 84-year-old Brian Graves, from Cardiff, who completed his 20th10K race, in a challenge he set for himself after losing his wife in 2005. Initially running marathons and half marathons, Brian decided to set his sights on completing 20 10K races at the age of 81 and has now achieved his goal.

Nic Clarke, Director of Fundraising and Operations at Kidney Wales, said:“It’s been yet another fantastic Cardiff 10K race and we couldn’t have asked for a better turnout. The race has grown so much in the last few years and to see more than 9,000 runners taking part was brilliant.

“On behalf of everyone at Kidney Wales, we want to thank everyone who took part and raised valuable funds for charities across Wales, volunteers, as well as everyone who turned up to support the runners. We also want to give a special thanks to all of our sponsors for supporting the race, their help has been invaluable.”