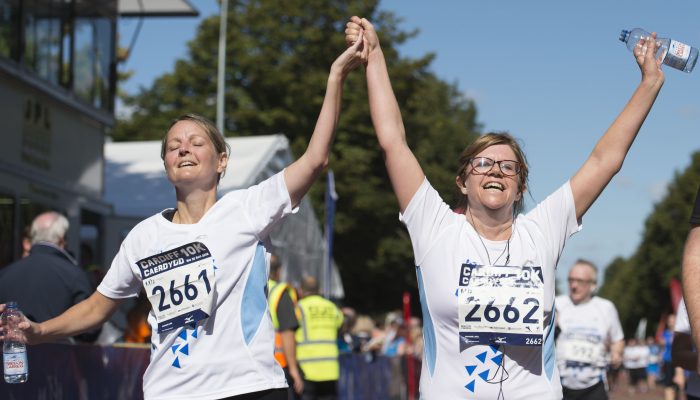 Record numbers of enthusiastic elite athletes, runners and fundraisers enjoy a run in the sun

More than 5,000 runners took to the streets of Cardiff to take on the Cardiff 10k in a celebration of fun, fitness and fundraising.

It was the 30th anniversary of the event, organised by Kidney Wales, and it also saw 500 people participating in the 2k family fun run before the main event.

The race started and finished at King Edward VII Avenue in the heart of the city’s Civic Centre, with a live band, massage stations and food stalls waiting for runners when they passed the finish line.

British Lion and Welsh international rugby star Jamie Roberts started this year’s race and the qualified doctor sounded the starting gun on the stroke of 10am to set 5,000 professional and amateur runners, young and old, on their way around the streets of Cardiff.

It was a colourful spectacle and many were dressed in a variety of costumes and fancy dress outfits including Iron Man, Superman and the full cast of the Power Rangers.

Jamie said: “It is a privilege to be here supporting everyone. It is an amazing event for Cardiff, especially on a day like today with the sun shining. The amount of people here for the 2k and the 10k is just phenomenal.

“I am the patron of the ‘Can Do’ project with Kidney Wales so to be invited down here to start the race is just fantastic.”

The first male and female runners to cross the finish line were John Beattie and Rachel Felton and 14-year-old Katie Kearsy, from the Forest of Dean, won the girls’ 2K.

Katie said: “It feels amazing to have won the 2K and to get this amazing trophy, although it is a bit heavy. I’ve been running since I was about eight and am a member of an athletics club back home. I’ve really enjoyed the day and am looking forward to relaxing this afternoon.”
As well as a number of elite runners, many families took part in the 2k family run, including Stuart Cunningham, 32, from Ebbw Vale, his wife Cassie and his two sons, five-year-old Issac and three-year-old Ryan, who suffers from cerebral palsy.

Stuart said: “The boys really enjoyed the day and we completed the course in under 20 minutes, although Ryan wanted to go faster and I struggled to keep up. My other son Issac, who suffers from cerebral palsy, took part in the race in his pacer and he and Ryan managed to raised £44, which we are really proud of. It’s a fantastic day and great to see so many people taking part.”

In addition to training hard over the past few months, people have also been raising money for a whole host of charities, including Tenovus, Diabetes UK, Sarcoma and the Make a Wish Foundation.

More than 100 people also took part in the race on behalf of the Follow Your Dreams charity, who support children with learning disabilities.

Melissa Haggett, community events coordinator for the charity, said: “It’s been an absolutely brilliant day. We’ve had loads of people run both the 10k and the 2k on behalf of the charity. Everybody has really enjoyed and I was surprised how quick everybody finished. We’ll definitely be coming back next year.”

This year also welcomed the highest number of corporate team entries, with over 150 company teams registered. Welsh companies involved included Legal and General, Brewin & Dolphin, Escentual, PWC, BPU, WRU as well as community teams such as the India Centre and the Transplant Team at UHW.

A team of 20 doctors and nurses from the University Hospital of Wales were also on the starting line, many of whom work in the dialysis and nephrology units who look after patients suffering with kidney disease, who rely on race organisers Kidney Wales for ongoing support and treatment.

A group of 100 Marks & Spencer’s staff from 21 stores across Wales also took part in the race to raise money for Macmillan Cancer Support.
Simon Phillips, store manager at the Cardiff Queen Street branch, said: “Not many of us have run 10k before but we all decided that we wanted to give something back to the community so we’ve been training a lot.

“We are raising money for Macmillan and have nearly reached our target of £25,000. It’s a fantastic day and the sun is shining, and we also have our mascot Percy the Pig here supporting us.”

Roy Thomas, chairman of race organisers Kidney Wales, said: “We couldn’t have asked for a more fantastic event in our thirtieth anniversary year. With a record turnout of 5,000 runners involved, the atmosphere was absolutely electric.

“We want to give a big thank you to everyone who has contributed from sponsors to the last person who came in – it shows that one of the oldest 10ks in the UK is one of the best.
“I cannot thank everyone enough who took part in today’s event and raised vital funds for charities across Wales. We couldn’t do what we do without you. See you next year!”