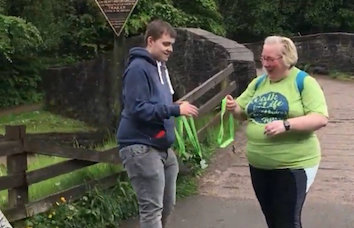 A 48-year old, from Blaenavon, whose husband has been suffering from chronic kidney disease for over 19 years, has decided to enter her first road race and take part in the Cardiff Metropolitan University Cardiff 10K, to raise funds for race organisers Kidney Wales.

Julie Gulliford’s husband Kevin has been battling chronic kidney disease since 2000 and the couple were recently given the news that his kidney function had deteriorated by 50 per cent since his initial diagnosis.

Kevin realised something was wrong when he started having regular nose bleeds and spells of dizziness. He decided to visit his GP to see what was going on where they rushed him into hospital and discovered he had chronic kidney disease.

Due to Kevin’s illness last year the family along with some friends decided they wanted to support Kidney Wales, the charity that helps kidney patients and their families across the country, by taking part in the Pontypool Walk for Life. They helped raise over £1,000, with the support of Stagecoach in Cwmbran. The family wereinvited to a dinner hosted by Kidney Wales, where they heard stories from others who had battled kidney disease as well.

Julie said: “I was inspired by the stories I heard at the dinner, particularly by a young girl who had recently undergone a kidney transplant. It made me realise how precious life is, so I decided there and then that I would sign up for the Cardiff Met Cardiff 10K.

“The dinner showed me that if I could help the charity and families in the same position as mine, then all the training would be worth it. The work Kidney Wales does is vital and they do an incredible job for the people whose lives are affected by kidney disease”.

Julie has never run a race before but is facing the challenge of a 10km run head on by jogging every week; so far she’s lost over 3-stone while training.

Nic Clarke, Director of Fundraising and Operations at Kidney Wales, said: “By taking part in the Cardiff 10K participants are helping us support families that are going through the hardships of kidney disease and ensuring that more research and funds are being dedicated to combating kidney disease each year.”

The Cardiff 10K is organised by Kidney Wales and is sponsored by Cardiff Metropolitan University. The route goes through the city centre and passes several Cardiff landmarks, it has become a favourite among runners. There is also a 2k fun-run available for families and anyone who isn’t quite ready to face the whole 10k.