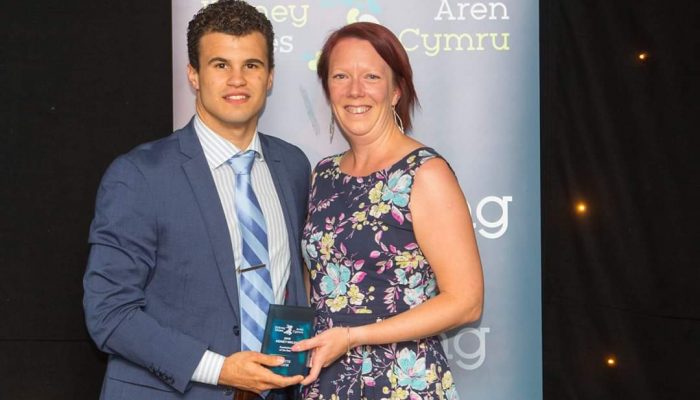 A Newport woman who was diagnosed with a hereditary kidney disease in 2017 is set to run at this year’s Cardiff Metropolitan University Cardiff 10K, to raise money for race organisers Kidney Wales.

Kathryn Benson was diagnosed with polycystic kidney disease (PKD), a year after her mum received the same diagnosis. Because of the disease, Kathryn’s mum was on dialysis until just 7 weeks ago, when she underwent a successful kidney transplant.

PKD is a genetic disease that over time causes multiple cysts to develop on the kidneys, making them enlarge. This causes a wide range of health problems from pain and discomfort to increased blood pressure. While these symptoms can be managed, over time the disease can lead to kidney failure.

After Kathryn’s mum fell ill in 2016, doctors asked Kathryn and her brother to take tests to see if they also had the same disease. Unfortunately Kathryn’s results came back positive, meaning she has to be closely monitored to ensure her kidneys remain healthy.

While the diagnosis came as a shock to Kathryn, she hasn’t let the news get her down. A keen runner, she challenges herself to run one marathon, three half marathons and the Cardiff Met Cardiff 10K every year.

This year she will be running the Cardiff Met Cardiff 10K with a team of eight from construction firm, Willmott Dixon, where she works, who will all be raising funds for race organisers Kidney Wales, a charity with a close connection to her and the family.

Kathryn said: “My diagnosis took a little while to sink in, especially after seeing my mum’s health deteriorate, but Kidney Wales has been so supportive. My mum goes to the events they run, and she’s been given lots of support to help manage her illness and recovery, which has been really important for her wellbeing.

“When I found out that my mum had PKD I instantly began taking an interest in the work Kidney Wales does and have been a fundraiser for the charity ever since. I’m hoping that myself and the Wilmott Dixon team can do a good job with how much we raise this year.”

Kathryn’s fundraising skills have been so impactful that she was given the ‘fundraiser of the year’ award by Kidney Wales in 2018, at the Kidney Wales Ambassador Dinner. Since 2016, she has raised £9,000 for the charity by raising funds at coffee mornings, garden parties, barn dances, skittles evenings and flower festivals.

Her advice for other people dealing with kidney disease is to be open and frank, saying: “The most important thing you can do is speak to family and friends if you’re living with kidney disease. It’s really easy to struggle inside and feel stigma around your diagnosis, but people are often really supportive.

“Since being diagnosed with PKD, I have had to cut back on caffeine and manage my diet a little more carefully, but that doesn’t mean I want or need to be treated differently. My friends, family and colleagues all understand that, but only because I’ve been open and chatted to them about my condition.”

Speaking about Kathryn’s involvement at this year’s Cardiff Met Cardiff 10K, Nic Clarke, director of fundraising and operations at Kidney Wales, said:“Kathryn is a real inspiration for people living with kidney disease. It’s incredibly hard to receive a diagnosis that tells you that you have a life changing illness, but the way she’s responded by staying active and supporting Kidney Wales is remarkable. We’re looking forward to seeing her in the race village after the race and will be presenting her and the Willmott Dixon team with their medals.”

The Cardiff Met Cardiff 10K is organised by charity Kidney Wales. The fast, flat route goes through the city centre and passes several Cardiff landmarks, making it a favourite among runners. There is also a 2K fun-run available for families and anyone who isn’t quite ready to run the 10K distance.

If you feel inspired to make a donation to Kathryn, you can visit her fundraising page at https://www.justgiving.com/fundraising/kathryn-benson1