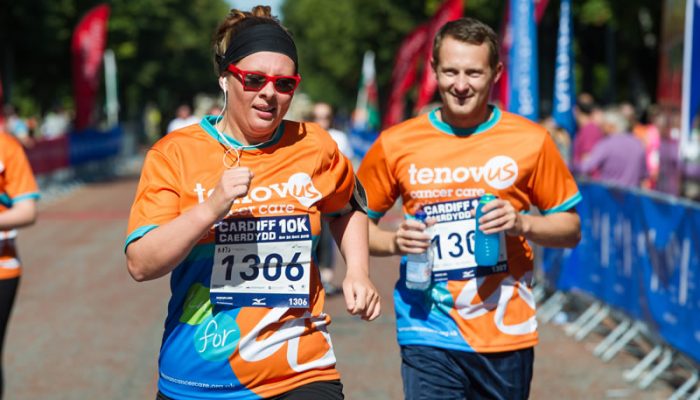 Children in Wales who suffer from kidney disease are set to benefit from a state-of-the-art refurbishment of the Children’s Kidney Centre at University Hospital of Wales which was unveiled yesterday thanks to funds raised from last year’s Cardiff 10K race.

The newly refurbished Children’s Kidney Centre at UHW, offers a comfortable environment for families to utilise whilst their children undergo the life-saving dialysis treatment that keeps them alive whilst they wait for a donor organ to become available.

Many of these youngsters require dialysis three times a week, 52 weeks a year, and so having a dedicated space for patients and their families to relax in in-between dialysis treatments is crucial. The refurbishment has transformed the previously uninspiring grey space into a bright, colourful and restful area, meaning it is a far more pleasant environment for patients and their families to pass their time during often difficult hospital visits.

Kidney disease and renal failure predominantly affect individuals during their later years, however there are many young children and teenagers who have to cope with the reality of kidney disease and renal failure on a daily basis. The Children’s Kidney Centre has a team of consultant pediatric nephrologists, nurses, dieticians, a psychologist, a social worker and a play specialist who, with state-of-the-art technology, provides the best care and support possible for these children and their families.

The new advancements in technology in the centre will also allow for teaching, training, and multidisciplinary meetings and Dr to Dr video conferencing.

Dr. Rajesh Krishnan, consultant pediatric nephrologist at the Children’s Kidney Centre at the University Hospital Wales, said: says: “Kidney Wales offer us vital support in our commitment to providing top level care to children suffering with kidney disease and renal failure in Wales. We can’t do what we do alone and to have the support of such a passionate and hard-working charity is so important.

“We are incredibly grateful to everyone who raised money for Kidney Wales last year, without you the refurbishment of the Children’s Kidney Centre would have been impossible. Life on dialysis is tough and to have top notch facilities makes all the difference to patients and their families as they endure their time at the hospital.”

One patient who has benefitted significantly from the refurbished Children’s Kidney Centre is 7 year-old Summer Kansiray from Ogmore Vale.

At 14 months, Summer was diagnosed with a Wilms’ tumour, a rare form of kidney cancer, in her left kidney. She endured six months of treatment at Cardiff’s University Hospital of Wales before having the organ removed. Unfortunately Summer then relapsed and the cancer returned in her right kidney six weeks later, which also had to be taken out.

Before she could have a transplant for her second kidney, Summer spent two and a half years without kidneys on a dialysis machine at home, for between 12 and 14 hours every night, and was only allowed to drink 240ml of water every 24 hours.

As a result of her experiences, Summer and her family attend the Children’s Kidney Centre on a regular basis. Summer’s mother, Joanne Kansiray said: “As a family we spend a lot of time at the centre and really appreciate the improvements that have gone into making this space a much more uplifting environment to spend time in.

“At times when we are required to spend many hours, and often days here, and it can sometimes become very distressing, however the new space is certainly a happier place to be.”

Commenting on the refurbishment Kidney Wales chief executive, Roy Thomas, said: “We rely on the remarkable people who fundraise for us to be able to provide those children suffering with kidney disease, and their families, with vital facilities like the Children’s Kidney Centre at the University Hospital of Wales. I for one am incredibly grateful for our inspirational fundraisers and cannot thank them enough.

“The Cardiff 10k is our biggest fundraiser of the year and I wish all the runners the best of luck, and urge anyone who hasn’t signed up to get involved. After all, it’s for children like Summer, and her family, that we do it for. Please sign up today and help us raise these vital funds.”

Last year’s Cardiff 10K saw almost 5,000 runners take part which raised a record sum for race organiser Kidney Wales, which is going directly into improving care for local patients; the refurbishment of the Children’s Kidney Centre being a flagship project.

And this year once again Kidney Wales is reaching out to runners across Wales to take part in the events landmark 30th anniversary year.

The iconic road race is being held in Cardiff city centre on Sunday 6th September.

The Cardiff 10k is one of the top ten road races in the UK, and has raised a staggering £1.5 million for Welsh charities in its three decade history, including St. Johns Ambulance, Cancer Research Wales and LATCH.

What’s the next step?

Sign up online at www.cardiff10k.com to register over the telephone or to learn more about the team challenge events call 02920 343 940.

You can set up an online fundraising page at www.cardiff10kfundraising.com to support the Kidney Wales Foundation, which will make a difference to families across Wales affected by kidney disease and renal failure. Kidney Wales are asking for a £40 fundraising target from each of their supporters which can pay for an individual portable DVD player to make the many hours a week a patient spends on dialysis less distressing.

Runners supporting Kidney Wales will receive a Kidney Wales running vest or breathable t-shirt to ensure runners can be easily spotted by supporters along the course, a professional photograph which will be taken before the race and the chance to have paid entry feed refunded if fundraising exceeds £150.

Breccon Carreg, this year’s official water sponsor will be on-hand across the race water stations to provide runners with bottled water and plenty of cheering.