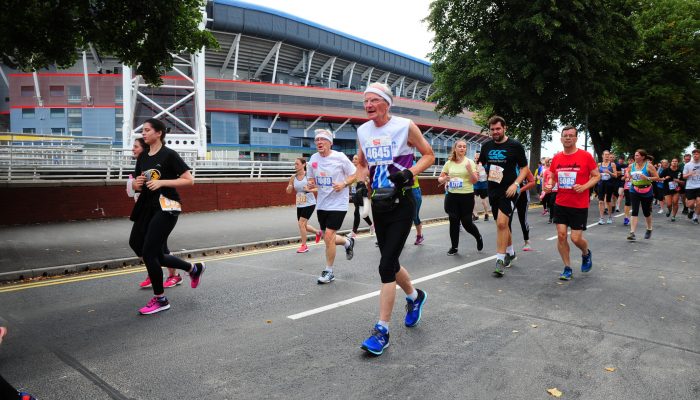 An 84-year old man living in Cardiff is set to complete his 20th 10K race at this year’s Cardiff Metropolitan University Cardiff 10K, in a challenge he set for himself after losing his wife.

Brian Graves, who moved to Cardiff in 2018, lost his wife June in 2005 after a battle with cancer. The couple, who had been married for nearly 48 years, would keep themselves active by taking walks around nature spots. After her passing, Brian decided that he’d take up running again to stay fit.

Having only run a long-distance race once before his wife’s passing, the Southampton half marathon at the age of 60, Brian decided to jump in feet first to his new pastime.

Training three times a week, Brian set himself the goal of completing 9 more half marathons, and over several years he achieved his goal. He ran the Sheffield half marathon eight times between 2004 and 2017, and also ran the Cardiff half marathon in 2016.

After the Cardiff half marathon, at the age of 81, Brian decided to focus on a shorter distance and then set himself the challenge to run in 20 10K races.

In 2019 Brian has already completed the Cardiff Bay Run and the Newport 10K, completing both around the 80-minute mark. He will also be running the Cardiff Pizza Run 10K and the Race for Life 10K, before finishing his challenge at the Cardiff Met Cardiff 10K, which takes place on September 1.

A keen supporter of Kidney Wales, Brian has made a donation to the charity ahead of the Cardiff Met Cardiff 10K race, and he also shared some motivations for other runners looking to get involved:

“At my age you’ve got to be determined to stay fit, but I also really enjoy the social side of taking part. After running the Cardiff 10K last year, people are ever so friendly and it’s really nice to talk to other runners along the way.

“I really enjoy running around Cardiff as the courses are much flatter, especially compared to Sheffield, and you get to enjoy the fresh air and take in some beautiful surroundings.”

“Brian is a real inspiration at this year’s Cardiff 10K and 2K and we hope his story encourages other people to sign up. His involvement shows that people of all ages can take part and have a fun time. Running brings a lot of people together and there’s lots of interaction between runners and with the cheering crowd, so it’s a great way to be part of a community.

“We know the crowd will be cheering Brian on and we look forward to giving him his medal once he crosses the finish line.”