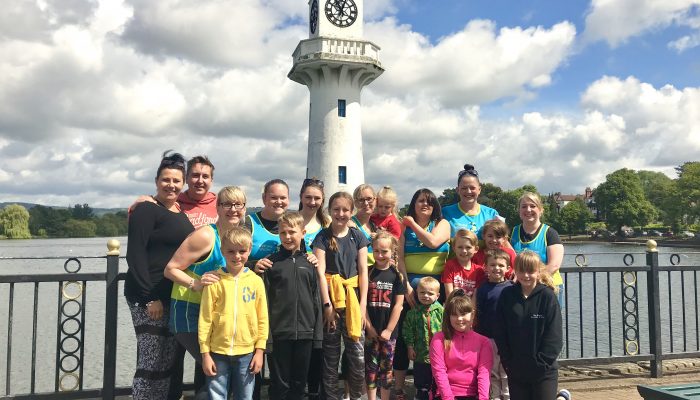 A woman from Pontycymer, in Bridgend County Borough, has inspired more than 100 friends and relatives to get their running shoes on for the Cardiff Metropolitan University Cardiff 10K this year, following the tragic loss of her partner.

Nicola Elward (36) had been with her partner Alan (44), for 16-years, however he passed away while waiting for a third kidney transplant in June 2018, due to complications with endocarditis; a rare infection of the inner lining of the heart.

Having bravely faced kidney disease for much of his life, Alan had his first kidney transplant in 2002, however after seven years, he required a new kidney following a kidney failure. In response to this terrible news, Nicola donated her own kidney and Alan responded well to the transplant.

However, tragedy struck seven years later. Alan’s kidney failed again and while he was waiting for a third kidney transplant, his health deteriorated, and he sadly passed away.

Following her loss, Nicola has signed up for this year’s Cardiff Met Cardiff 10K, to help raise £2,000 to be shared between Kidney Wales and the British Heart Foundation.

After announcing her involvement, friends and family of Nicola and Alan’s have rallied together, and 70 people have joined her in running the 10K, with a further 30 signing up to do the 2K fun run. The group have called themselves ‘Alfie’s Misfits’, inspired by Alan’s ‘Alfie’ nickname among friends.

Speaking about the Cardiff Met Cardiff 10K, Nicola said: “It shows how much Alan was loved that so many people have signed up to run the Cardiff 10K for him. One of my friends is even travelling from Ireland to take part. I’ve taken part in the Cardiff 10K race twice before, but this time it will be extra special with Alfie’s Misfits behind me.

“As some of the team have never run a 10K before, we thought the ‘Misfits’ was a good group name. I know they’ll have a great time and really enjoy it.

“I’d also like to thank Kidney Wales for all of the support they provided to Alan. I know from first-hand experience how important fundraising is in allowing them to help people affected by kidney disease, so I’m delighted to run for them. I also hope that Alan’s story inspires people to sign up to the transplant list. Not only can you save someone else’s life, but it also changes yours for the better, knowing that you’ve made a difference. It’s a truly wonderful thing to do.”

Before the Cardiff Met Cardiff 10K, Nicola has organised a fun family day on August 3 at Pontycymer rugby fields to help raise funds for her chosen charities. Alan was a player for Pontycymer RFC in his younger days and was a close supporter his whole life, so Nicola felt that it was a fitting place for the community to get together and have fun while celebrating a good cause.

To support Nicola in achieving her fundraising goals, visit his JustGiving page: https://www.justgiving.com/crowdfunding/nicola-parsons-2?utm_term=G3yZ2JzK9